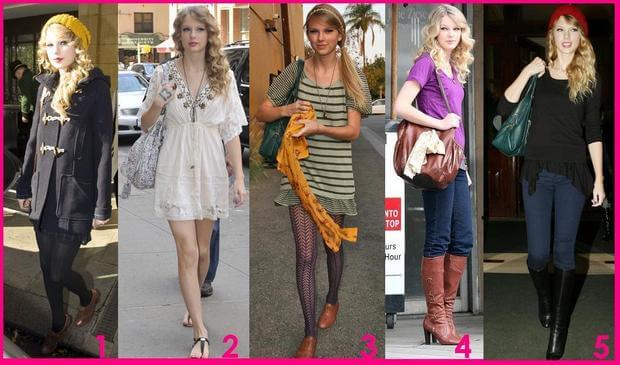 By far one of the hottest celebrities of this generation is the uber talented country and pop superstar Taylor Swift. The American singer-songwriter blasted into the world’s consciousness with her 2009 album, Fearless, which quickly became the best selling album of that year, cementing her as a true pop superstar.

Along with Taylor’s success and popularity in the music industry, people from the fashion world also started to take notice of her girl next door persona. From her red carpet looks in 2006, you can definitely see a style evolution from that country cutie that she was to the fashion icon that she is today. Countless blogs, sites, and articles have been devoted to delineating Taylor’s style evolution throughout the years. From her sundress and cowboy boot days to her red carpet couture gowns today, Taylor Swift’s style has significantly evolved with her music, making her a fashion and style leader among today’s pop stars.

No other dress made more headlines than Taylor Swift’s post break up dress that she wore at the 2013 People’s Choice Awards. Just coming off her break up with One Direction’s Harry Styles, Taylor showed up on the red carpet with her sexiest look to date — wearing a plunging, form-fitting Ralph Lauren number. Complimented with a simple pair of turquoise earrings and dramatic eye make up, her super hot dress was simple yet sexy, making it her sexiest look ever.

Another one of Taylor Swift’s sexy transformations occurred during 2012’s American Music Awards where she left her long gowns behind for a stunning Zuhair Murad mini golden dress. She was the epitome of sexy and sophisticated with the long-sleeved, gold embellished mini dress that had an open back, making it one of her more mature outfit choices. The mini dress showed her immaculate long legs and flawlessly sexy back. She also ditched her signature red lips for this outfit, opting to have dramatic eyes and nude lips, instead. Definitely one of Taylor’s more sophisticated and iconic outfits.

In her “Begin Again” music video, Taylor can be seen donning a 1950’s-inspired ensemble riding a bicycle on the cobble stone streets of Paris. Her pleated, bow tie baby blue blouse was tucked into a high waisted floral print full skirt, and complimented by cat-printed loafers and red-framed glasses. She was the epitome of a youthful, classy lady with this fun and inspiring look. The ensemble was a bit too old fashioned but the color combination, the accessories, and her hair and make up gave it a Taylor Swift youthful and feminine signature that translated very well into a stylish outfit.

And lastly, Taylor Swift’s signature casual look is the plaid shirt, jeans and boots ensemble. You can often see Taylor don the perfect plaid shirt on days when she’s going about town, and one of the most memorable looks is when she wore a purple plaid shirt, black skinny jeans, and knee high riding boots, complimented by a bright blue beanie. This signature Taylor Swift casual look can stylishly be complimented with a nice canvas messenger bag to give it a more woman-on-the-go look.

With the evolution of her music to a more sophisticated and mature sound, so has her fashion choices, making her one of today’s fashion icons whose style has seen been emulated by many teens and young women.