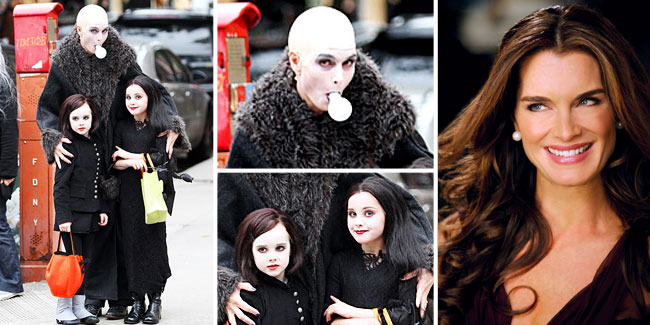 In the haute couture world of celebrities, one would think it’s anything goes as far as costume ideas. A person that has superstar status can’t just be seen in a run of the mill ensemble or recycle a costume from a previous year. It’s also important that the garb isn’t going to get them lauded on TMZ, though it’s said there’s no such thing as over-exposure.

The stars absolutely must stay away from cartoon characters and animated series characters unless they happen to be comedians, but frankly that’s a little too close to type for my taste. Honestly, that’s a little too close to type for most anyones taste. A celebrity can easily go way over the top, keep it tastefully simple and classic or anything in between. Often, tipping the boundaries of what is appropriate is the sure fire way to keep them on top of the paparazzi’s most wanted lists.

The first celebrity most people associate with over the top costume regalia is model mogul Heidi Klum. Year after year, adoring fans flock to see what she is wearing around the time of Halloween. Her choices are anything but dull. Heidi is noted for her wacky costume style, dressing from everything from a fully feathered black raven mask and short dress to a gorgeous alien and even a skin tight skinless human body suit. We all wait anxiously each year to find out what she will do next.

It’s light hearted and fun to dress as another celebrity and even more so when other celebrities do it! Take actress Holly Robinson Peete who has done a spot on costumed impression of rapper Lil’ Wayne or actress Kelly Ripa and singer Nick Lachey who dressed as Kim Kardashian and her then NBA player hubby Kris Humphries in full wedding dress mode. Truly delicious!

Taking cues from past as well as upcoming films, some celebrities choose to dress as a nod to certain characters. Take television personality and fashion designer Lauren Conrad, who dressed as a flapper channeling her inner “Gatsby” girl, hinting at the 2013 release of the film “The Great Gatsby”. Singer Ciara has dressed as the character Storm from X-Men fame, looking as beautiful as ever. Actress Lea Michele dressed as The White Swan from “Black Swan” fame and just last year actor Dwayne “The Rock” Johnson, was green with anything but envy as the enormous character “The Hulk”.

Some celebrities choose to go completely against type. Gorgeous actress Brooke Shields has dressed as Uncle Fester from The Addams Family. Good girl Hilary Duff transformed herself into a robber complete with black mask and money bags. Then again, some stars complete go with type and vamp up their image even a few more notches. Singer and actress Jessica Simpson has dressed in total German wench mode with her trademark long blonde hair and heaving bosom. Singer Christina Aguilera is known for dressing scantily and costume time is no exception, such as the year she dressed as a sexy nude nurse.

There are few things that celebrities can’t get away with. Even when mistakes are made, a star’s publicist can spin their way into making it the new now next thing. That’s the power of a superstar!

Maya is a blogger and a freelance writer. She has contributed to many websites with her fashion and wedding related articles. She is currently working on a project for Costume Collection, where she got the inspiration for writing this article. In her spare time she likes spending time with her friends and family, reading and cooking.